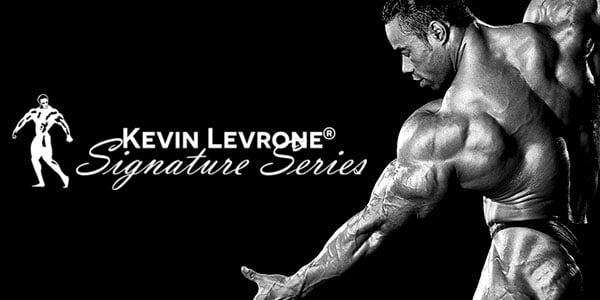 One of the IFBB’s most winningest bodybuilders Kevin Levrone, who we last saw teamed up with Gear before things started to get going for the brand. Has confirmed the coming of his very own line of supplements suitably titled the Kevin Levrone Signature Series. While nothing is available just yet, the man behind the whole thing has released details on each of his six products planned for this year. Looking to cover all the mainstream categories the BCAA and SAA formula LevroAminoSurge, the creatine LevroCrea, pre-workout LevroPump, post-workout LevroRecovery, protein powder LevroWheySupreme, and the whey isolate led protein LevroISOWhey. Despite the titles bordering on confusing with no spaces where there probably should be, the supplements themselves don’t look half bad. Crea goes a little further than just your average single form product with a 7g four form blend of creatines, the pre-workout features highlights such as 4g of CarnoSyn and 1g of AgmaMax agmatine, and the two protein powders both have the exact same menu which includes the rather unique recipe banana-peach. For more information on the Kevin Levrone Signature Series check out the brand’s website where you can find everything on all the supplements except for where and when they’ll be launched.