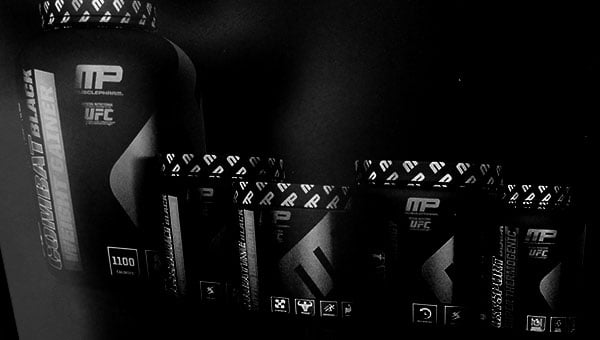 The image above may be a little difficult to see, but that isn’t something we’ve done to the picture just how dark it actually is. Tucked away and subtly placed around Muscle Pharm’s booth at the Arnold are teasers of the brand’s upcoming Black Series. The line is going to be a spin off of Muscle Pharm’s Hybrid and Core Series, as well as feature the introduction of an entirely new supplement. Teased in the image is the weight gainer Combat Black, the amino cocktail Amino 1 Black, an alternate version of the commodity Creatine Black. Another Muscle Pharm pre-workout with Assault Black, and the super thermogenic making use of the popular USP title Oxysport Black. For those that may be wondering how different the Black Series is going to be compared to the brand’s other dark themed line the Hardcore Series. We can’t quite confirm the difference in formulas but do know like the Hardcore Series, the Black Series is going to be exclusive. The location fans will need to visit to get the products is the other giant in the industry GNC, with a launch promised for exactly one month after the Energy Sports and Muscle Bar arrive on May 1st.