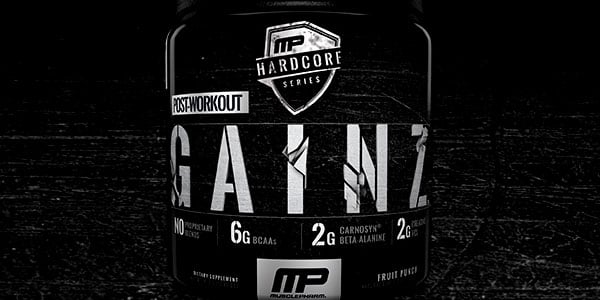 Earlier in the week we got that closer look at Muscle Pharm’s Hardcore Series post-workout Gainz that we were waiting for, really only confirming one or two more features that weren’t on the bottle. The details we had were that the supplement packed very similar ingredients and doses to that of Muscle Pharm’s Hardcore pre-workout. Like Wreckage Gainz lists 4g of leucine, 2g of creatine HCl and 5mg of BioPerine black pepper. Others that made the cut are 2g of CarnoSyn beta-alanine, a feature Wreckage has 1.6g of, 3g of glutamine, and 1g each of isoleucine and valine making up Gainz 4:1:1 ratio of BCAAs. Since we didn’t have the official facts panel of Muscle Pharm’s recovery cocktail to go off at the time, we did say that there was the chance more could be in the mix. It turns out the above numbers are where it ends for the 30 serving formula. The only new piece of information we have is that Gainz will be arriving in at least two flavors, the same amount we know of for Wreckage, with watermelon and raspberry twist. We are still short on a date or any idea on when Muscle Pharm’s Hardcore Series will arrive, however being exclusive to Bodybuilding.com we at least know where it will arrive.