Cereal flavored Isolicious will have zero fat and sugar

CTD Sports has finally released everything you need to know about its upcoming Isolicious, the protein powder that immediately grabbed a lot of people’s attention last month when it was first unveiled. For those that missed the big announcement, the reason the supplement got so much interest is because all of its flavors are cereal inspired. The product’s three confirmed options are the Cinnamon Toast Crunch like Cinnamon Cereal Crunch, Coco Puffs like Coco Cereal Crunch, and the Fruity Pebbles like Fruity Cereal Crunch.

As mentioned, today we have all the details missing from the original Isolicious announcement, right from its amount of protein and carbohydrates through to its protein source and exact size. Starting with the macros, making up each of the supplement’s 30g servings is 25g of protein, all of which is whey protein isolate. Just 2g of carbohydrates, zero fat and sugar, and only 110 calories.

The one last detail worth mentioning is CTD’s only size for Isolicious, a 1.6lb cereal inspired box, packing a total 24 servings. All that’s left to come now is the product’s launch, which according to the brand is due to take place early next month. 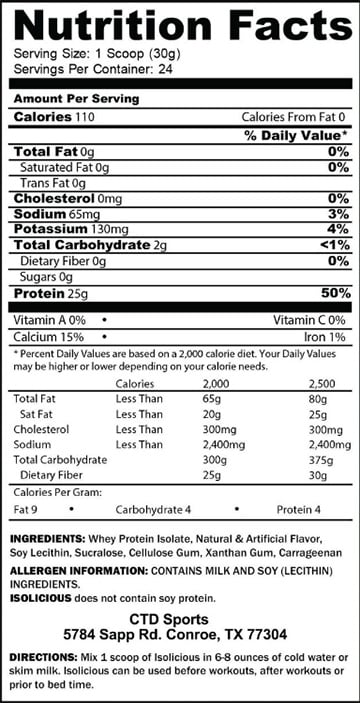