The team at Force Factor has introduced an all-new nootropic supplement called Forebrain. The brand is promoting a few handy benefits for the product including enhanced sharpness and clarity, improved memory, and boosted overall cognitive performance.

When it comes to the formula behind Forebrain, Force Factor has actually loaded it with premium, branded ingredients. All together the nootropic supplement features five ingredients as well as BioPerine at its usual dose of 5mg per serving to enhance absorption of everything. 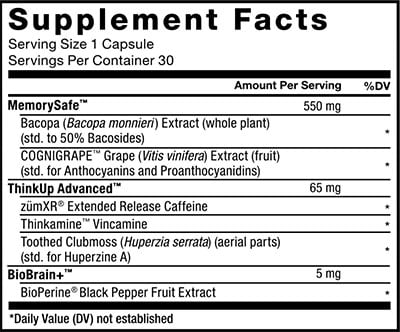 The main ingredients making up Force Factor’s Forebrain are broken up into two non-transparent blends. The heavier MemorySafe blend weighs in at 550mg and contains bacopa monnieri and CogniGrape grape extract. You then have Forebrain’s ThinkUp blend weighing 65mg and made up of zumXR extended release caffeine, Thinkamine vincamine, and huperzine A.

According to Force Factor, Forebrain will be launching through the brand’s own website as well as GNC in the coming weeks. Fans will be able to pick it up in the one 30 capsule bottle size, which is enough for 30 servings as the product is a one capsule per day formula.