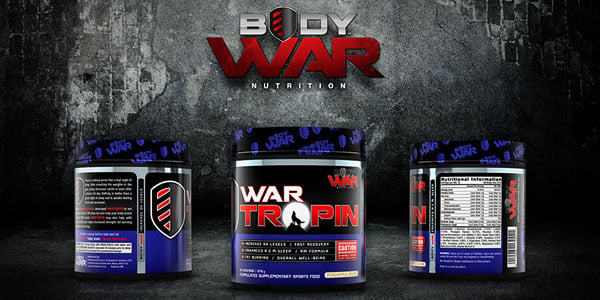 Yesterday we posted details on Body War Nutrition’s upcoming supplement Amino War which is due to arrive in about two weeks time. It was said that the product would also be coming in combination with another formula that we now know as War Tropin. Taking the Australian brand’s range of supplements up to a total of six is a nighttime concoction, combining a hefty list of 10 different ingredients. Among that list are some of our more favorite features from the category including 1g each of GABA and phenibut, half a gram of velvet bean and a 250mg touch of tryptophan. As you can see in the image above Body War’s War Tropin comes in powder form, with just the one flavor that you may recognize from Amino War’s menu pineapple crush. For a closer look at all the brand have packed into their nighttime product read on below to see its facts panel, however before we close out, Body War fans may notice something more than just pineapple crush in common with War Tropin and Amino War. Yesterday’s unveiling of the BCAA cocktail saw Amino War covered in bright yellow, now today we get War Tropin in a purpley blue. The reason behind the alternative colors is that Body War are about to rebrand, which will see the colorful theme carried across to their other four supplements. Unlike War Tropin and Amino War, the branding isn’t going to hit the other products in two weeks time as Body War have said it will be a slightly slower process.