The apocalyptic supplement company Outbreak Nutrition has completely unveiled its focusing enhancing product Transmit, after dropping a sneak peek of it a couple of weeks ago. As expected from the brand, its nootropic competitor features a loaded formula, something we’ve seen from Outbreak a number of times in the past.

Like a lot of competitors in the growing nootropic category, Outbreak Nutrition Transmit aims to enhance cognition and focus. It comes with a packed three-capsule serving to ensure it does just that, including an ingredient we have yet to see in a focus supplement.

In total, Transmit features eight different ingredients, all of which are transparently dosed. The ingredients making the list are 300mg of bacopa, 125mg of Cognizin branded citicoline, 200mg each of Alpha alpha-GPC, theanine, caffeine, and phosphatidylserine, and 10mg of huperzine A. 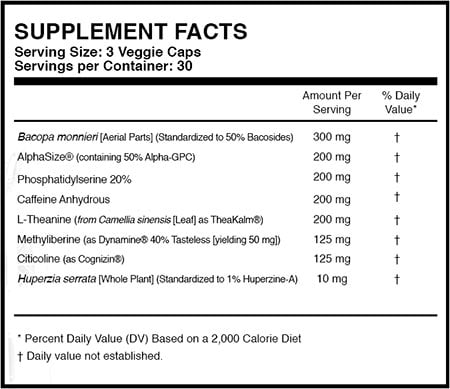 The one last feature in Outbreak Nutrition’s Transmit formula is Dynamine, dosed at 125mg per serving and yielding 50mg of pure Dynamine. For those unfamiliar with the ingredient, Dynamine is a new stimulant from the company behind TeaCrine, with Transmit being the first nootropic product we’ve seen using it.

Outbreak Nutrition’s first major entry into the world of focus supplements is not available just yet but isn’t all that far away. The brand is saying Transmit should be out and available in about four weeks’ time, so somewhere around the beginning of next month.