Stimul8 Loaded is Finaflex’s more loaded pre-workout supplement that launched in the US earlier this year. The packed out product is now available down under in Australia although there are a number of things different about it.

Firstly, Finaflex’s Stimul8 Loaded in Australia doesn’t look the same as the one in the US. Instead of featuring the brand’s more recent branding made up of white and purple, the supplement has its previous look colored mostly black with a hexagonal pattern in the background.

The next difference with the Australian Stimul8 Loaded is that it comes in a lot more flavors than the original US edition. Instead of having just two tastes on its menu, it has five with Pink Lemonade, Hawaiian Blast, Green Apple, Pineapple Passionfruit, and Peach Mango. 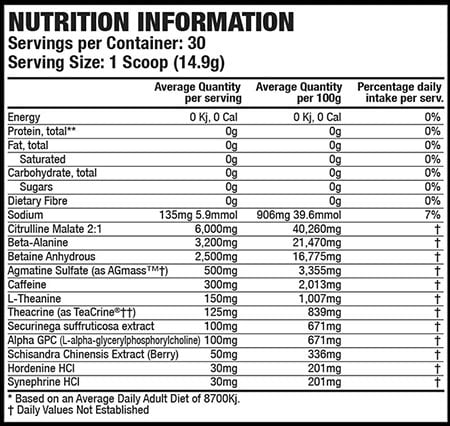 Some examples of the major differences are that the US version has the pump enhancer Nitrosigine, which isn’t in the Australian one, but instead, it has other pump ingredients with Agmass agmatine and 6g of citrulline malate. MCTs and VitaCherry tart cherry are also missing from the Australian Stimul8 Loaded.

It’s actually very interesting to see such a different formula from one part of the world to the next, for the same pre-workout product. We’re certain Finaflex had its reasons for the changes, in fact, this is far from the first time we’ve seen a brand change a supplement for a particular party of the world.

For anyone interested in purchasing Finaflex’s Stimul8 Loaded in Australia, there appear to be a number of places stocking the product. You can find the supplement at the likes of Nutrition Warehouse and Supps247, with both locations stocking it for the same price of $69.95 (51.97 USD) for a full 30 serving tub.