Peach not as thermogenic as advertised, Femme’s flagship formula put to the test 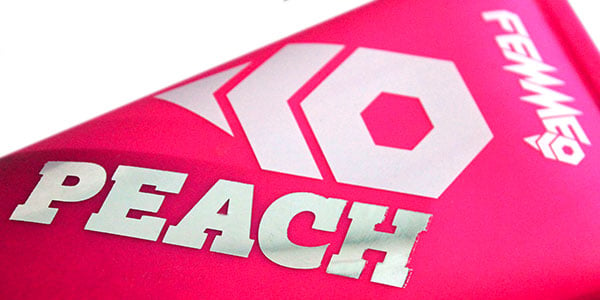 On most occasions we get supplements in to review that belong to categories we are familiar with. Pre-workouts, post-workouts, protein powders, we’ve tried almost everything on the list. Having experience with other products from similar or identical fields helps gauge one’s quality, and figure out how good a supplement actually is. The product type we have for review today however is one we have in fact never come across before. While it does make weight loss promises, it is Femme Peach’s form that has us in unfamiliar waters. Basically the item is a skin firming and thermogenesis cream designed to deliver it’s effects once applied direct to your skin. It is indeed a brand and item designed with women in mind, regardless we did put it to the test to see what kind of results it could give a couple of guys.

Peach officially directs you to apply ‘an ample amount to legs, thighs and buttocks, until the cream is completely rubbed in’. The product also suggests using it morning and night, with the possibility of one of those windows being pre-workout. As mentioned we have zero experience with cream or any kind of supplement that you rub into your skin. When we applied Peach it was literally a wait and see situation, which had us lying around thinking nothing is going to happen for about 10 to 15 minutes. Once that downtime is up though, you will start to feel something. At first it feels like your ass is going numb from sitting on it for too long, you then move a bit but nothing changes. You proceed to stand up then realize that it has nothing to do with you sitting down for any period of time, just that Peach has set your butt and anywhere else you applied the cream on fire. If you have never experienced any kind of product like this before, then your reaction will be quite like ours. Wondering if you have an allergic reaction or something, as Peach quickly becomes more irritating than any rash you’ve ever had. The worst part about it is that it’s not an itch you can scratch, where your fingers can ease the frustration. You can scratch your ass all you want, and the Peach fire will keep burning.

While we may be making Femme’s creative weight loss solution sound like a failure, that initial reaction will die down in about the same amount of time it took to kick in. After around 10 to 20 minutes the irritation will subside and it becomes both something that calms over time and something that you get used to. To help encourage you to use Peach more than once, that irritating feeling doesn’t really come back. After our first time it was no where near as bad, in fact the more we used it, the longer it took to take affect and the lighter it’s level of burning became. Of course Peach isn’t just an annoying skin cream, as we said it’s initial kick does die down. When that happens the supplement essentially leaves you with a nice comfortable heat centered around the area you rubbed it in. Despite our sex, for us that was indeed the ass, where Femme’s flagship product, which was once sending us up the wall with a torched behind. Then left a ring of warmth that actually makes you feel like you on a perfectly set heater. Your skin isn’t too hot, it’s definitely not cold, it’s right in between, cool enough to put your hand on the area to gauge the temperature yourself. When this effect actually started coming in we were quite amazed, as anyone could come up with something to irritate your skin. A comfortable body warming cream however, that was a little different.

After feeling the effect first hand, the next question is, was the effect in any way thermogenic as advertised? The quick answer we believe is no, but we can understand how some people can see Peach as an effective (spot) thermogenic. The idea is awesome, squeeze out some cream, apply it to your troubled areas, and target them when doing cardio or whatever, more than anywhere else. The heat does make it feel like that is what’s happening, for us however, we’ve experienced the thermo effect at it’s best, and Peach doesn’t really deliver anything similar. The warmth is there, and it’s quite the thing to feel. What’s missing is that burn you get when doing low or high intensity cardio, as well as any kind of supplement persuaded sweat. If Peach does have a thermogenic effect, within the area the cream is applied to, then it would have to be at a level you can’t feel or we just weren’t able to pick up on. The heat as mentioned is there, but for us that didn’t confirm thermogenesis. We did look at the results, which meant examining our own belfies every two to three days during the month long trial. Although the same kind of thing was apparent, with zero noticeable changes. This was also the case for the skin firming Femme promised, however we will defend the brand on that one. As to be honest it was not something we focused on or (as men) had any idea how to gauge.

At first Femme’s Peach comes off as quite the creative product, and even after we’ve somewhat unsuccessfully reviewed it we still feel the same. Regardless of whether or not you like what we’re going to call warmth in disguise, you have to give it up for the brand, as even though the supplement makes a lot of promises none of which we really saw fulfilled. Femme’s flagship formula has carved out it’s own little audience, creating a market and following with it’s signature effect and style, well enough that Peach is almost like an overpriced piece of technology. It’s not so much the quality you’re paying for, it’s the image or crowd association you’re getting with it. Peach kind of reminds us of Muscletech’s original Halo. Gains and results aside, the post-workout had this chill that went down your throat, which from what we know had nothing to do with how the product actually worked. It was however extremely cool and definitely made it feel like the supplement was doing something. Femme Nutrition currently getting ready to enter the pre-workout market -