Myokem’s Magnitropin one of the most complete muscle builders available 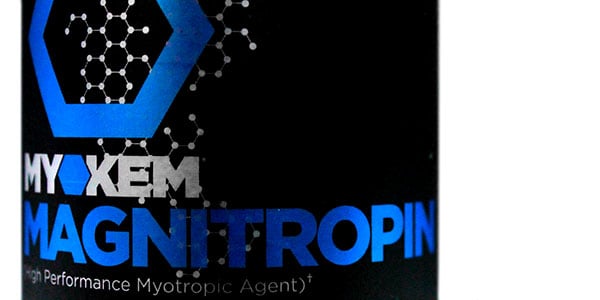 It may have taken us some time to finally finish our cycles of the supplement, but have now got enough experience under our belt to fully review Myokem’s Magnitropin. The product was one of the brand’s two muscle builders released back in July, with both launched in what was an unmissable insider Lab deal. We were fortunate enough to get two bottles of Magnitropin, and over the past two months have been putting them to the test. At six capsules a day we definitely saw the supplement perform, so well in fact we probably could have reviewed it after just two weeks. Regardless of how fast it acted, we gave it the full term of two bottles lasting a total of 48 days. This is one we know a lot of have been asking about, and of course with Magnitropin being from Myokem it did not disappoint.

Instead of breaking down the product’s performance week by week, we are going to go over it’s effects one by one. Firstly we’re going to talk about what we call the alpha feeling. It’s something we’ve seen in other muscle builders and testosterone boosters where your whole being just becomes a little extra focused and driven. Basically when it comes time to workout you’re immediately zoned in and ready to perform. It’s almost like a pre-workout in the sense that it kicks in, however instead requiring the drinking of any stimulants you get the feeling naturally. We call it the alpha feeling as it really amplifies your drive and every intention to build muscle, if that is of course your goal. You get it in your head that your whole day revolves around training and meals. Cheating on your diet isn’t a thought that ever creeps in even if you’re on the loosest of plans, and days without a workout feel even worse than they do off Magnitropin. Especially when the supplement has just the one thing running through your mind.

From the alpha feeling we move into an area that of course goes hand in hand with testosterone enhanced mood and mindsets, libido. In the past we’ve seen formulas that increase this so well morning wood becomes something you can count on every day. Random boners are also an effect we’re familiar with, regardless of where you are and what you’re doing. With Magnitropin we’d have to say that not much of that applies. Your libido isn’t going to be raging or heightened to a great amount, it’s only really noticeable when you actually perform. The alpha feeling we were talking about earlier kind of carries over into the libido department and increases your hunger. It’s not animalistic or anything, more like an increase in desire and interest if and when the opportunity presents itself.

The next effect we have to bring up is hunger, actual food hunger. This is something we were told about, but didn’t really feel came in until the second week. It’s no so much the fact that you get hungrier or crave food a little more. It’s that when you start eating you will literally be able to consume two or three times your regular amount. You can throw back your scheduled meal, but it won’t fill you up or alternatively leave you empty, essentially just unchanged. On occasions we pushed the effect to the limits, with our reviewer being on an off season diet, and saw some impressive amounts of food thrown back. Regardless of how much was being consumed, it wasn’t necessarily the ability to eat that was impressive. What stood out with Magnitropin was that you could increase your calorie intake so easily across any numbers of meals and guarantee yourself that you’d eat it, all without feeling full, empty or hungry. The product’s standout effect actually makes Magnitropin perfect for those who have trouble putting on weight, or consistently eating sufficiently sized meals.

Moving on we have the signature effect in muscle builders, increased size and strength. For us this was something that we felt was partly a result of the other areas. The alpha feeling, libido evident testosterone boost, and ability to raise your calorie intake, all together helped improve size and strength. If we had to say which got the bigger boot, size and weight did obviously change with the power to put away more food. Strength however definitely stood above it, as it is almost immediately that your numbers get bumped up. Extra 10 and 20lb plates can be thrown on with confidence as warm up weights get knocked out with ease, and you end up being able to perform a few extra reps on a total you’d usually be pushing to hit your target. We didn’t notice any real jump in low rep strength, although that did eventually come after a couple of weeks of being able to do a handful of extra reps when it counts. The argument could be made that the size and strength improvements could have been achieved without Magnitropin, which to that we’d say probably not. Some of the size maybe, but the strength was definitely fueled by the supplement, as our reviewer wasn’t trying to gain anything in that area. The program was the same, the increase in weight lifted just came on, and as mentioned in rather larger amounts relatively suddenly.

Lastly we have something Myokem promoted for Magnitropin, an effect we just didn’t think was going to be that major. The product advertises enhanced muscle pumps, and despite it not being a pump pre-workout or anything with ingredients you usually count on for pumps, it does deliver. The supplement doesn’t do much in the first week, although as you move into the second you’ll start to notice that pumps from workouts don’t tend to wear off. More importantly your pumps in those workouts become a lot more intense, so much so it’s like you’re using a pump pre-workout. You’ll find your body ends up in a state of fullness, that again amplifies that alpha feeling. With your mind set on working out, eating right, and doing what you need to build muscle. The product’s all day pump really just puts the icing on the cake making training that much more fulfilling, and walking around in the state that Magnitropin has you in that much more enjoyable.

All in all Myokem’s Magnitropin is actually one of the most complete experiences we’ve ever come across. We have reviewed supplements that do some of the things Magnitropin does, however that is all they do. Myokem’s muscle builder basically combines a handful of the effects and results you’d get from two or three of it’s competitors, and wraps into a unique 24 day cycle. We honestly didn’t notice too much of a drop or increase after that two week mark which we touched on a few times, so even if you were to run just the one bottle you’re going to enjoy it. Magnitropin’s star effect has to be the one we referred to on almost every occasion, the alpha feeling. It was that mentality and altered state of well-being that amplified the other features. Having that confident mindset and more focused intention to reach your goal, in combination with the ability to eat as much as you need, lift that fair bit extra, and work out with an undying pump makes Magnitropin a product you have to try at least once.